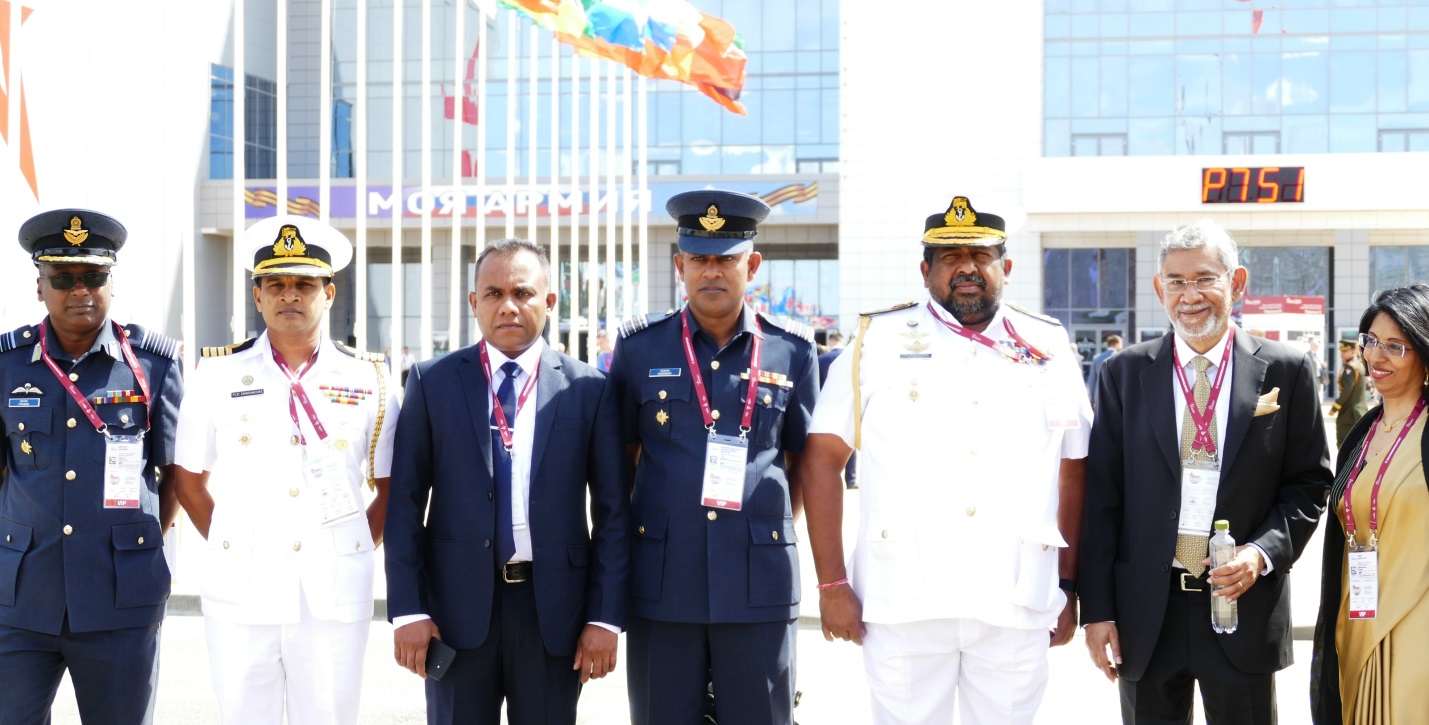 On June 25-30, 2019, Russia is hosting the largest exhibition of military and dual-purpose equipment in the modern "Patriot" Park near Moscow. A meeting with General Gerasimov, Chief of General Staff of the Russian Armed Forces and First Deputy Minister of Defence of the Russian Federation, was also arranged for the Sri Lankan delegation during their visit to Moscow.

This year the international Military Technical Forum "ARMY-2019" gathered a record 110 foreign delegations, represented by the highest military ranks. The flags of all participating countries flew in the Russian air, and one of them was the national flag of Sri Lanka. The Forum was attended by a high-level Sri Lankan delegation, headed by Admiral R. C. Wijegunaratne, Chief of Defence Staff, and including Captain P. G. J. C. Samaranayake, Secretary to Chief of Defence Staff, A. S. S. Kumara, Senior Assistant Secretary, Ministry of Defence of Sri Lanka, and Wing Commander W. D. C. Wijesinghe, Aide de Camp to Secretary of Defence. The delegation also included H. E. Dr. Dayan Jayatilleka, Ambassador of Sri Lanka to the Russian Federation, and Group Captain Uditha Piyasena, newly appointed Defence Attaché at the Embassy Sri Lanka in Moscow.
The Forum opened with a plenary session and a solemn ceremony of hoisting the Forum's flag. The audience was addressed by Yuri Borisov, Deputy Prime Minister of the Russian Federation, Sergei Chemezov, General Director of the Rostec Corporation, Denis Manturov, Minister of Industry and Trade, and General of the Army Sergei Shoigu, Minister of Defence of the Russian Federation.
A meeting with Dmitry Shugaev, Director of Russian Federal Service for Military Technical Cooperation, was held for the Sri Lankan delegation on the sidelines of "Army-2019" to discuss Sri Lanka – Russia cooperation in military technical sphere.
In the framework of the Forum, the delegation was warmly greeted by Colonel General Alexander Fomin, Deputy Minister of Defence of Russia, who expressed his solidarity with Sri Lanka in the fight against international terrorism. The delegation had an introductory meeting with JSC Rosoboronexport, the Russian state mediator for exports of defence-related and dual purpose products.
The first day of the ARMY-2019 Forum ended with an impressive dynamic exercise with tanks, such as T80, T72B3, T90; MBRLs Tornado G (continuing the tradition of the famous Katuyshas of WWII), self-propelled guns Hosta, Msta-S, multiple launch rocket system Smerch, surface-to-air gun and missile systems Tunguska-M1, Pantsir-S1, anti-aircraft missile and gun system Tor-М2, attack helicopters Mi-28N, as well as Russia's new mobile short-range ballistic missile system Iskander-M. The demonstration concluded with an impressive T80U tank firing in the air after a ramp jump stunt.
In his interview to Russian TV Channel One, which is the top Russian TV channel with the audience of over 250 million viewers worldwide, Ambassador Jayatilleka stated that the ARMY-2019 Forum in Russia stood out among similar military equipment exhibitions and shows in other countries because of the unique combination of the most modern technologies and armaments, the products of the best of human minds, with the warmth and heartfelt feeling, which was so much felt at the Forum. Ambassador Jayatilleka added that the Russian arms had for the most part been in the service of the good, and Sri Lanka, and many other countries appreciated Russia's role as the world balancing power, securing stability and peace worldwide.

with General of the Army Valery Gerasimov, Chief of General Staff of Russia 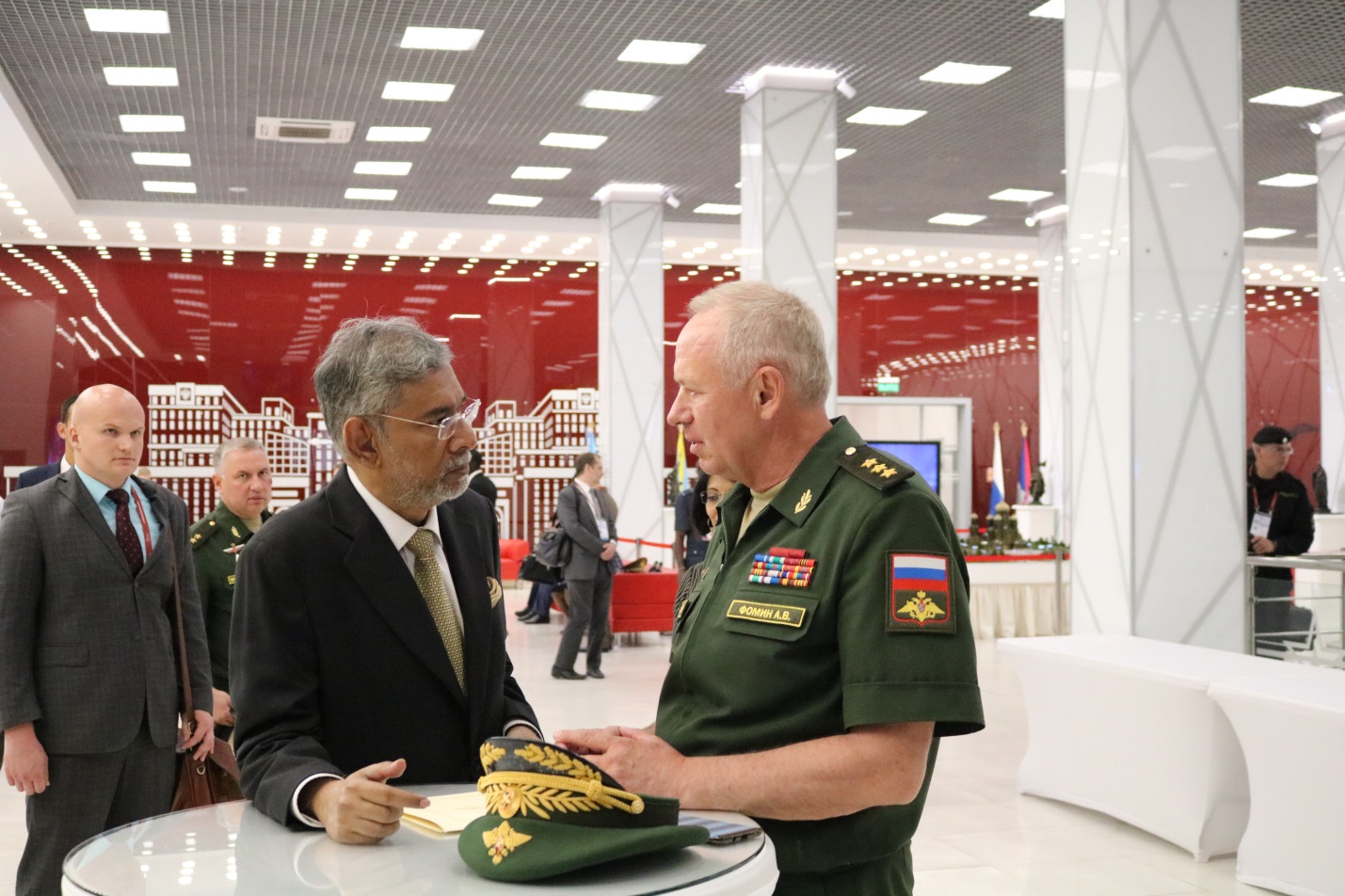 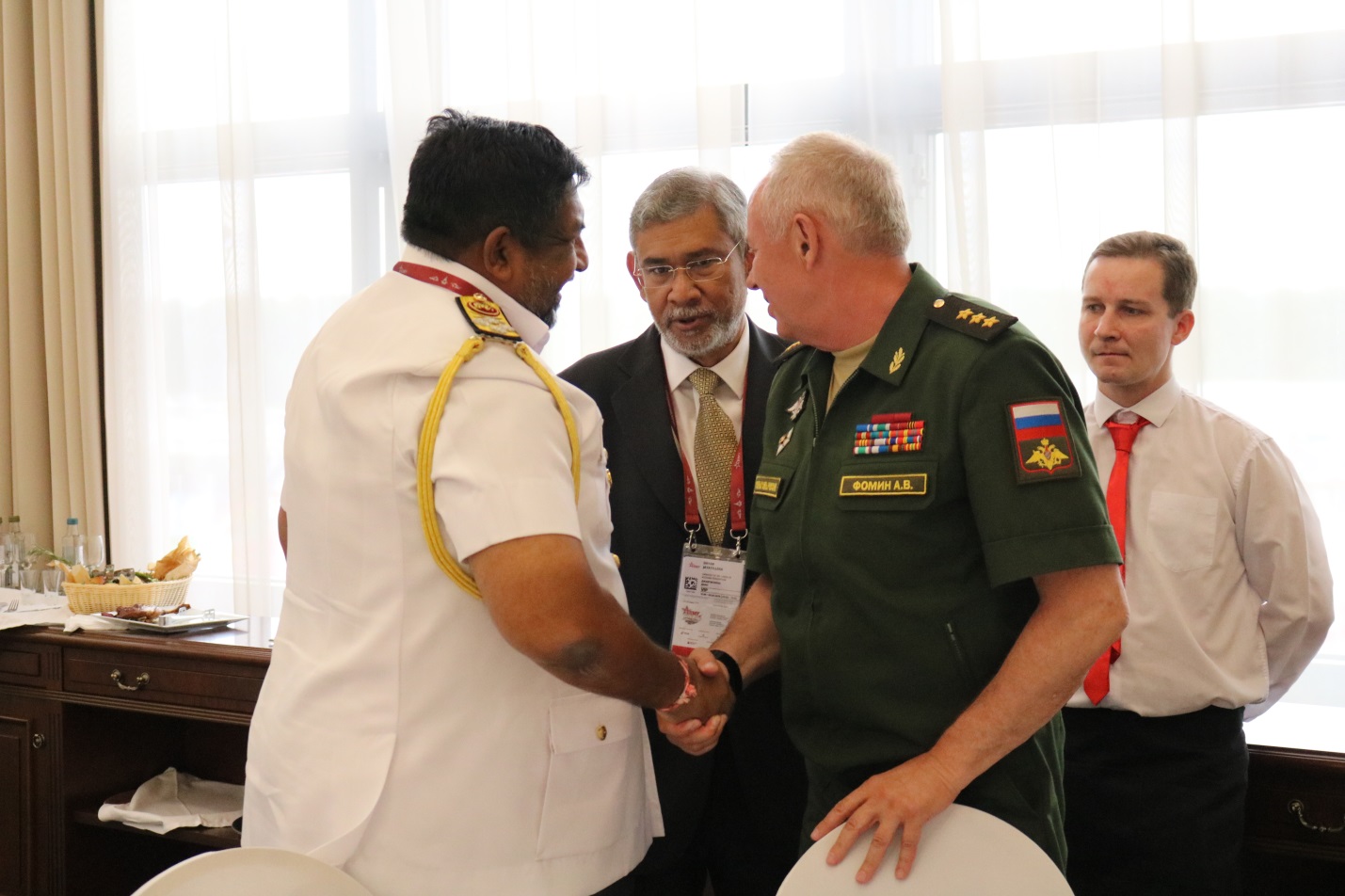 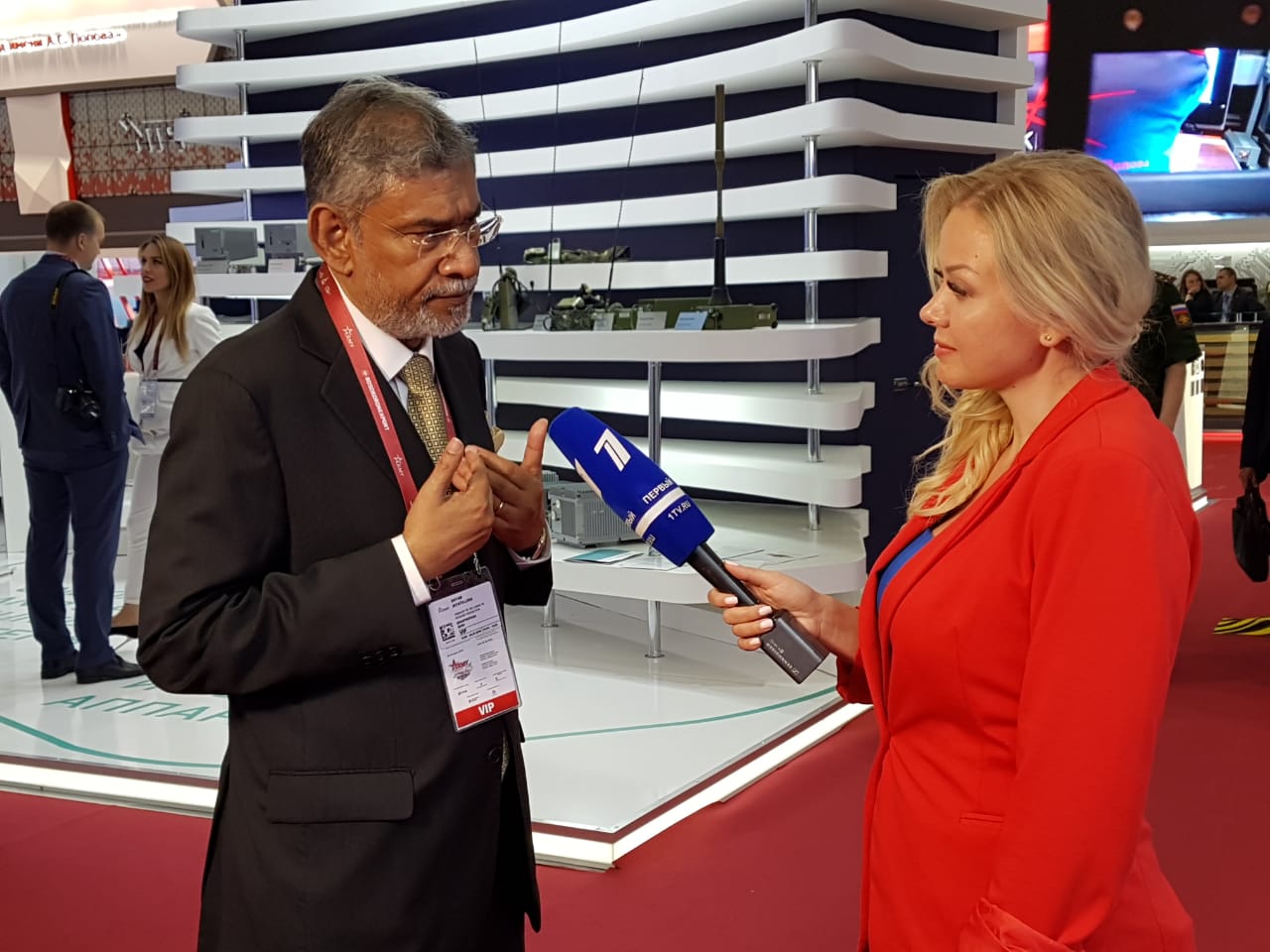 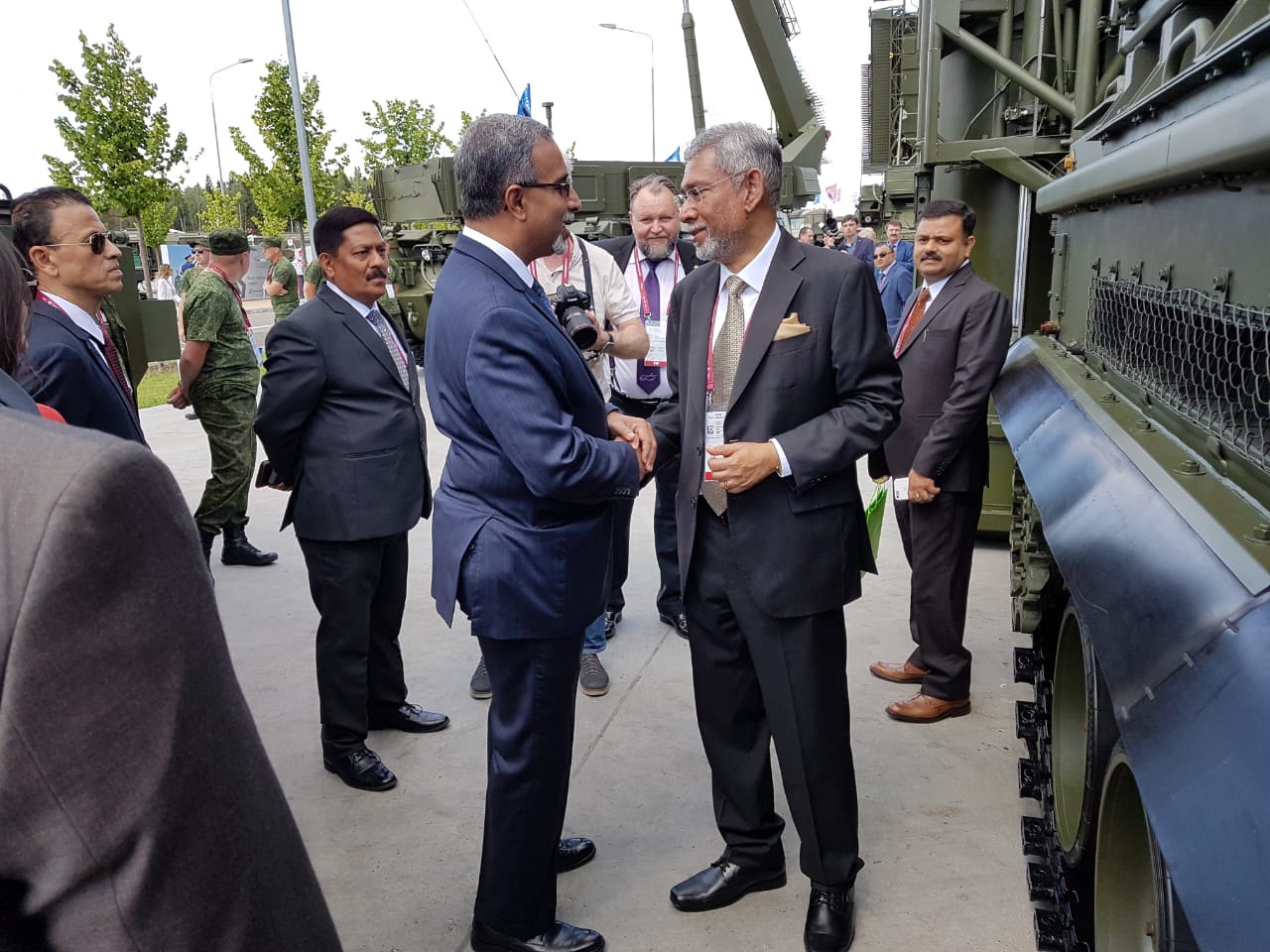