Sri Lanka enhances its ties with the Republic of Kazakhstan 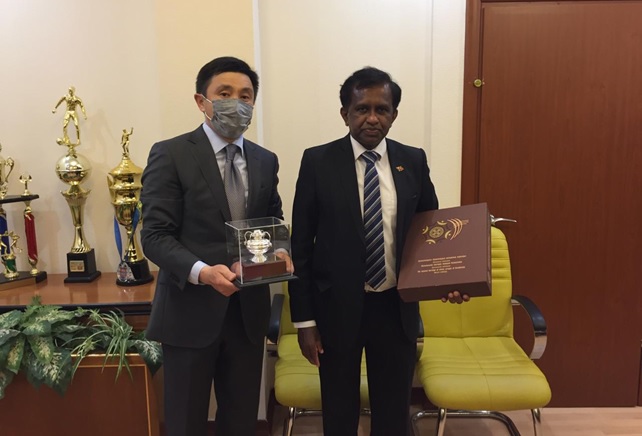 In the framework of the visit the Embassy delegation had a series of meetings with several Institutions of the Republic of Kazakhstan including Ministry of Foreign Affairs, State Protocol and Asia-Pacific Departments, Ministry of Culture and Sport, Conference on Interaction and Confidence Building Measures in Asia (CICA), Chamber of International Commerce.
During the meetings, the parties discussed the prospects for cooperation between Sri Lanka and Kazakhstan with the focus on intensification of the existing bilateral mechanisms of collaboration in the spheres of trade, sports and tourism. The matters pertaining to political consultations, appointment of Hon. Consul, participation in Ministerial meeting in October 2021 and CICA Summit 2nd part of 2022 were also discussed.
Ambassador Lamawansa conducted a fruitful discussion with Deputy Minister of Culture and Sport of the Republic of Kazakhstan Mr. Kozhagapanov. The meeting was also attended by Heads of Committees for Culture, Sports and Tourism.
The Embassy delegation was also received at the Chamber of International Commerce to discuss investment opportunities, and priority areas for extending cooperation in trade and tourism.
H.E. Prof. Lamawansa and Mr. Mohamed Anas attended the informal Ambassador's Club meeting at the invitation of Executive Director of the Secretariat of the Conference on Interaction and Confidence Building Measures in Asia (CICA) H.E. Ambassador Mr. Kairat Sarybay. The event was also attended by Deputy Foreign Minister of Kazakhstan Mr. Shakhrat Nuryshev, Member of the Mazhilis of the Parliament of Kazakhstan Mr. Amerkhan Rakhimzhanov and Ambassadors of the CICA Member States.